I have been coming to the village for years and enjoy walking to the shrines past the Akrotiri and to the village of Afionas but the Arillas Trail is something new.
It is the best signed trail I have come across. In just under two hours I was never in any doubt as to which way to go. The planners are to be congratulated.
I went on my own, armed with a small bottle of water, at the start of August. It was a truly memorable and very enjoyable experience. Thank you to all involved in its creation.

I began at  the small road between Thallasa and Costas’ Restaurant on the Beach and walked away from the sea. There used to be a crowd of ferocious small dogs down there but they seem to have gone.
The trail heads straight across fields and skirts and crosses the little stream. There are thoughtfully placed mini-bridges wherever needed.
It was fascinating seeing so much that was fresh and new to me, so close to the main routes. Lush undergrowth and the constant calling of the crickets. In the whole of my two hour walk l came across only one other couple following the trail in the other direction.

Vegetable tunnels bursting with all sorts:

You come across strange sights every now and then, such as an abandoned car and a small bus graveyard and all this is in the valley directly behind the shorefront.
Being August and very hot the ground is absolutely baked dry.
This is a covered well.

The trail winds away from the busy part of the village near the Gallini Apartments. Here you begin to climb away and up into the hills behind Arillas and Agios Stefanos. At first the way is lined with charming villas draped in abundant flowers but soon you feel yourself away from civilisation again and it’s a real pleasure to come across small family houses, brightly painted and neatly tended and well tucked away from the tourist route.

There is a definite feeling of escape on this trail.
And then you’re all on your own in an unknown but beautiful area. Olive trees, crickets, rough undergrowth, carefully cleared from the trail, might I add (and thanks again for someone’s hard work during the off season)
The trail climbs dramatically up and across a bluff that looks more and more like a cliff the further along the trail you go.

This takes you in a long loop away from and then back towards the Magoulades end of Arillas.
I stood and watched two buzzards wheeling round the thermals over the village. They were quite noisy and shocked me by swooping one by one into a tree some five metres from where I was standing, calling loudly and then sweeping out through the branches of the pines and back into daylight. They were too fast for me to grab my camera.

I have seen them before in Arillas, once being dive bombed by defensive swallows and once sitting broodily on a fence post and they are magnificent birds. It’s a real privilege to be so close to them.
I did spot one other bird with black and white bars on its wings. It was about the size of a Jay and flew away from some fallen lemons it was pecking at. I am still wondering what it was.
This is a view from the bluff and the second picture shows Arillas, the sea and the island.

There is a stretch of the trail on tarmac road but it is soon over and you are led once again round and through fields and small farms till you finally come out on the main road into the village.
I can truly recommend this walk and am looking forward to doing it again and, once again, many thanks to the people who created it. 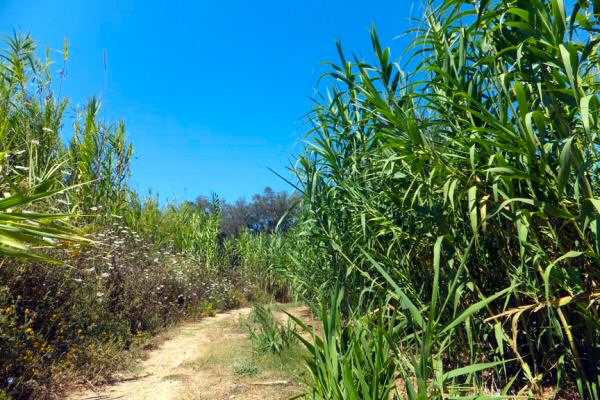 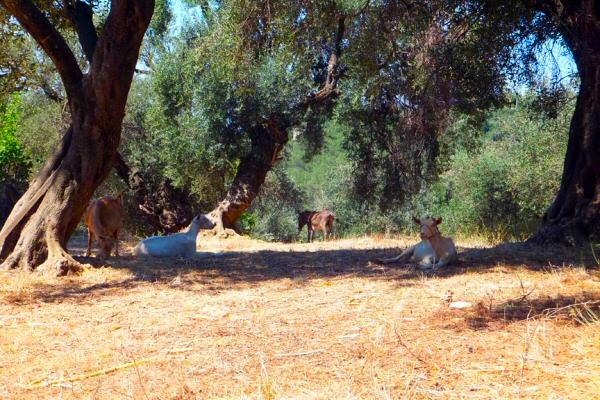 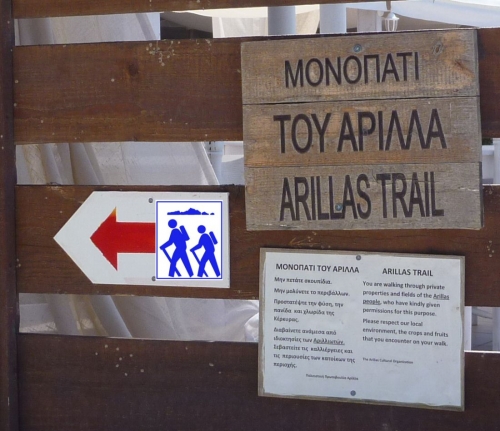